When I was growing up, my parents didn’t seem to think about the moral implications of the place they chose to live. In general, there seemed to be little worry about sprawl, traffic congestion, and many of the other urban issues that concern us today.

Oh, wait, I take that back…there was one big one: it was considered wrong to live in the city. In the late 70s and early 80s, growing up in rural/suburban America, the image of the city was that of a dangerous, sinful place. It was full of crime, traffic, congestion, people of a bad influence, and strangers with candy.

Today, many urban protagonists (such as myself) deride the suburbs as being environmentally and socially irresponsible, dysfunctional (à la American Beauty), exclusive, isolated and out of touch. Yes, many of these concerns are justified. But are we being too critical? Are we, the brave young urban pioneers of Middle America, being just as judgmental as the suburbanites were a decade or two ago?

Posted by Jason R. Carroll on Friday, June 29, 2001
Tags: design, opinion
I’ve been out of the driving “scene” for some time now. Now, because of my job this summer, I’m on our country’s fair roads on a regular basis. Here’s the point: I knew that cell phone use was rampant, but I didn’t understand just how rampant. Even in a relatively small city like Rochester, every every everyone in an automobile is gabbing away. It really frightens me. Of course, New York’s Gov. Pataki will likely sign the law banning hand-held cell phone use while driving soon. Oh, my, what will they all do? Also, I feel that I must disclose that I too have had a cell phone bestowed upon me by my employer. I promise, I only use it a piedi.
Posted by Jason R. Carroll on Wednesday, June 27, 2001
Tags: commuting, driving, walking
So now I've completed one year of graduate school, and all I have to show for it is this lousy formula:

Little moments of beauty, I must photograph them all.

You see, once you find something good, you want to capture it and relive it—replay it like a good song. But the whole point of the thing is that you can’t do that because those moments come when they will and you must be open to them, otherwise you will miss them. They come when they will and you can’t make them come and you can’t replay them, only remember them. That’s why a great song doesn’t give you the same feeling every time—in fact it wears out after a while.

Great moments of emotional clarity and awakening only come when you’re not looking, and your mind and heart are open.

This all leads to the point of why nostalgia is so dangerous. People are looking to relive their past precious moments by recreating the past. By doing this, they are closing their minds and their hearts to the present and missing the wonder of the now.

Posted by Jason R. Carroll on Wednesday, June 20, 2001
Tags: memory, nostalgia, philosophy, self
In Rochester, the speed limit is really the speed limit. The kind, courteous drivers here treat it as the maximum speed at which they are allowed to motor around--they do not violate it. I've never seen this before in my life. And while this experience so far has been somewhat of a respite from my usual encounters with crazed Eastern New York and New Jersey drivers (the worst), it's starting to DRIVE ME A BIT CRAZY! SPEED UP YOU PEOPLE!
Posted by Jason R. Carroll on Tuesday, June 19, 2001
Tags: driving, travel 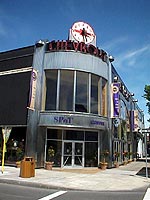 Spot Coffee, here in Rochester, is a very large, well-executed (design, service, quality of food & beverage) coffeehouse. It reminds me of some of the original coffeehouses I visited in Budapest about seven years ago: enormous, elegant, open rooms with a bar in the center, serving a wonderfully diverse group of clientele. Students, professionals, the elite, the poor, the misfits, the gypsies, they were all there. This one’s a bit funkier (and a bit more yuppie-dominated) than those traditional coffeehouses (it’s built inside an old Chevrolet showroom), but it revives the essence.
Posted by Jason R. Carroll on Saturday, June 16, 2001
Tags: coffee, travel
Did you ever see the Dr. Katz episode when the patient is talking about the Rocket Pack? And how that if you had a Rocket Pack, it would be the last thing you thought about at the end of the day, and the first thing you thought about when you woke up in the morning? Rocketpack-rocketpack-ROCKETPACK! Well, driving a convertible is kind of like that feeling. I’ve never owned a convertible, but now that I’ve had a chance to drive one on a regular basis, I think I’m ruined for life. The best is when you drive under things—trees, bridges, stars…I mean, they’re right there man! Pure joy.
Posted by Jason R. Carroll on Thursday, June 14, 2001
Tags: television
Nostalgia is powerful but dangerous. Nostalgia can be used to infiltrate your defenses, no matter who you are. Be careful concerning the matter of nostalgia.
Posted by Jason R. Carroll on Wednesday, June 13, 2001
Tags: memory, nostalgia, observations
Rochester is quite a nice city in many ways. It is the second major “second tier” city in which I've had the pleasure of residing (Cleveland was the first). Rochester is approximately one-third the size of Cleveland. Its outlying small towns have not yet evolved into edge cities, but they’re on their way. Although these towns have, to date, maintained much of their urban integrity, their popularity as bedroom communities is causing a significant amount of traffic congestion.

Six o’clock on a Tuesday evening, and cars are backed up one-quarter of a mile atop the lift bridge crossing the old Erie Canal.