In 1994, while studying in Italy, I first learned about Futurist architecture from Gianni Pettna, one of the founding members of the radical 1970s architectural group Super Studio. Today, while searching for "modern designer doormats" (strangely enough), I am happy to report that I discovered a fairly comprehensive website about the early 20th century Futurism movement. From the website:

Futurism was a wide-ranging Italian movement that included painting, graphics, sculpture, poetry, literature and the performing arts and focused on the dynamic, energetic and violent character of changing 20th century life. It especially emphasised the power, force and motion of machinery combined with the contemporary fascination with speed. On the downside it also glorified war, denigrated women, favoured Fascism and vilified artistic tradition wanting to "…destroy the museums, libraries, academies of every kind…".

So, yes, the movement had its problems. But it sure did result in some fascinating building designs...

Posted by Jason R. Carroll on Wednesday, August 29, 2001
Tags: design, education, future
Sometimes, you're in the right place at the right time...and you have a camera. 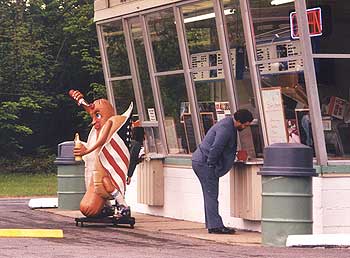 Posted by Jason R. Carroll on Monday, August 27, 2001
Tags: pictures, travel
If I see one more friggin’ painting of a “beautiful Ithaca nature scene” I’m going to be sick to my stomach.
Posted by Jason R. Carroll on Friday, August 24, 2001
Tags: art, opinion
Here is a memory-sketch of my childhood stomping grounds, illustrating all of the critical elements (I think). Click on the map for a larger image.

So now I’m back in Ithaca, trying to rest before the hurricane that is Cornell graduate school begins, and I get this bad news. This makes me very, very sad. The Arabica Coffeehouse at Coventry played an important role in my life, just like many people in this story. And how sadly typical—there’s a chance that it’s going to be replaced by a Starbucks. Now, the funky-cool, restless high school kids hanging outside will probably be replaced by the khakis and SUV set. Homogenization. Good for milk, not for culture.

Public declaration to my wife Rose: If I ever become that kind of real estate developer or property owner, please lock me securely in a small metal box, only providing a small meal of moldy bread and water each day.

Posted by Jason R. Carroll on Tuesday, August 14, 2001
Tags: coffee, self
In Rochester, cheeseburgers are “cheeseburgs” and hot dogs are “hots.” They have “red” hots (beef) and “white” hots (pork). These are all better than standard-issue Midwestern hot dogs, let me tell you. Citizens of Rochester are called “Rochesterians.” I can never say that right. Funny! It reminds me of an undergraduate college story. A friend and I played a prank on inhabitants of Dunbar Hall at Kent, who called themselves the “Dunbarbarians.” We washed one of the middle B’s off of the window where that name was displayed in giant soap letters. After our modification, the window read “Dunbar Arians.” Ha ha ha ha…
Posted by Jason R. Carroll on Friday, August 03, 2001
Tags: food, observations, travel
Newer Posts Older Posts Home
Subscribe to: Posts (Atom)