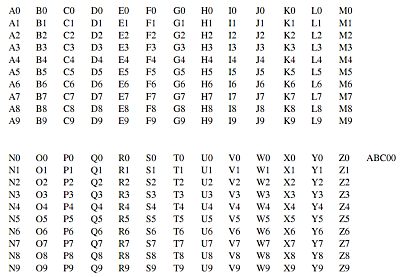 The Alphabet Hundred, as referenced on 4/25.

Posted by Jason R. Carroll on Saturday, April 28, 2007
Tags: children, education, math, pictures
Last night on the way home from Rose’s birthday dinner, and from visiting my new nephew (quite a full day), Esmé was sleeping, Max was looking out the window at the lights along the highway, and Rose and I were holding hands enjoying the peaceful drive.

About halfway home, we heard Max in the back seat talking to himself: “Eighty-one, eighty-two, eighty-three…eighty-eight, eighty-nine…Beedy.”

My inventive young man had actually counted to 261, in his own special way. Rose and I were absolutely cracking up the whole time he was doing this (once we realized what was going on, that is). Ah, the mind of a three-year old.
Posted by Jason R. Carroll on Wednesday, April 25, 2007
Tags: children, education, math
Now here’s what I call a good weekend: After taking Max to a friend’s fourth birthday party on Saturday morning, Rose and I decided to drive the kids around the perimeter of the Ravenna Arsenal, just to see how creepy and weird it is to have 20,000+ acres of semi-contaminated land fenced off in the middle of otherwise ordinary Ohio. I guess they used to make TNT and other munitions there, primarily during WWII. To put it in perspective, the Arsenal covers more land area than the nearby city of Akron (population: 210,000+). Afterwards, heavy fried food at a local pub.
Posted by Jason R. Carroll on Monday, April 16, 2007
Tags: history, observations, travel, weird
Over the past few years I've come to realize what perhaps may be my Achilles heel: I have the ability to maintain composure and think clearly in situations of duress and high responsibility, but small annoyances can provide an extreme distraction to me and in fact have the potential to render me near-useless.

An innocuous example: Stressful situation at work; suddenly something has come up; impossible deadline; how can we possibly get this thing done on time? No problem; let me handle it; I'll get it done with five minutes to spare; and I'll likely enjoy myself while doing it.

But if I have a pebble in my shoe or the mobile email feature of my cell phone isn't working all of the sudden, I'll obsess over this “defect in my system” until I can fix it, sometimes at the expense of more important things.

As a corollary to this, and a trait that is I suppose a good one: I love it when things work well; systems, tools, any sort of operation, and I'm pretty good at making things work well when I put my mind to it.
Posted by Jason R. Carroll on Sunday, April 01, 2007
Tags: observations, philosophy, self, work
Newer Posts Older Posts Home
Subscribe to: Posts (Atom)