On June 25 at 8:09 AM, Max entered the world. We love him very much, and so far he has peed on the floor of two of the rooms in our apartment. 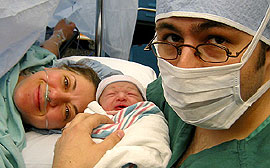 Posted by Jason R. Carroll on Monday, June 30, 2003
Tags: children, pictures
An observation this morning: A few days ago, on my walk to work, I took a particular shortcut; it was a new one for me--a quick cut across an urban parking lot that I hadn't seen before (the shortcut was not visibly apparent). I thought at the time, "Well, this is a nice surprise...I'll go this way..." I arrived at work and forgot about it completely.

Three days later, along the same route (I take different paths to work for variety), before I knew it, my body had involuntarily turned down the same shortcut. There was no conscious effort involved, in fact my mind was heavily occupied with other thoughts. Some sort of coordination between my subconscious mind and my body had occurred, and I was now taking the shortest distance between two points.

It made me think: I'd like to try an experiment. Take an urban area, say a 10-block by 10-block zone, with a lot of irregularities internally, and ask 100 or more people to participate. Then set a "Point A"--the beginning--and a "Point B"--the destination. Set up some barriers in the zone--things that prevent people from taking the obviously shortest route. Then create several hidden shortcuts that are far from obvious.

I'll bet that before 10 minutes elapses, everyone will be taking the shortcuts. The Path of Least Resistance, an irresistible, instinctive force, will govern the situation.

Posted by Jason R. Carroll on Friday, June 13, 2003
Tags: behavior, observations, people, philosophy, self
I ponder sometimes about all the spam that I get--in fact also about the amount of spam that everyone receives--and it makes me think... Spammers are a type of bottom-feeder within the information economy. Not only are they email marketers, which are bottom-feeders already, but they are the lowest type of email marketers, often using deceptive techniques in an attempt to separate one from his or her money. Then I look at my Popfile history, and it's buckets tell me that only 16.5% of the email I receive is legitimate (non-spam). Then, you know, naturally, I start to get a little upset. But I consider: Perhaps these bottom-feeders have a true place in our internet-economy…indeed, in our economy as a whole. They have always been around, after all, in one form or another. Could it possibly be that the snake-oil salesman serves a legitimate purpose? The most important thing: Bottom feeders exist in nature, in ecosystems…and they comprise important parts of those ecosystems. Bottom feeders are part of the cycle in nature--are they simply a part of the cycle in economics as well? Is it misguided and futile to try to get rid of them? That said, what purpose do they serve? Is it to punish naive customers for being so naive? Is it a “survival of the fittest” kind of thing? Is it the economic-ecological way of ridding the weak and uninformed economic agents from the game?
Posted by Jason R. Carroll on Monday, June 02, 2003
Tags: computers, economics, email, nature, observations

Posted by Jason R. Carroll on Sunday, June 01, 2003
Tags: education, math, pictures
If there's one thing we've learned from the internet...it's this: distributed systems work. In any sort of goods or services production, we're always trying to achieve economies of scale--ever since Henry Ford taught us that lesson. But economies of scale can blaze a trail of destruction in their wake, because they have such massive levels of inputs (often natural resources) and outputs (what is produced PLUS whatever the waste product may be). Distributed systems have small point inputs and outputs of whatever they're producing-distributing-using, and aren't as destructive. I'm speaking in the most general terms possible here--it doesn't matter what the distributed system is "carrying".

Back to our example. The internet, and similarly P2P networks, rely on small scale, interconnected, redundant "pieces" to achieve their power. We should have learned by now that the network, not the central plant, is the key to our future. Actually, I believe we have already learned this lesson (nature of course taught us first), but there is much in this world that is highly dependent on the old ways of thinking, and fearful of losing economies of scale (because what would we do then?), so it will take a long time for things to change.