I come from a special family, with special talents--like my Grandpa, who can do this: 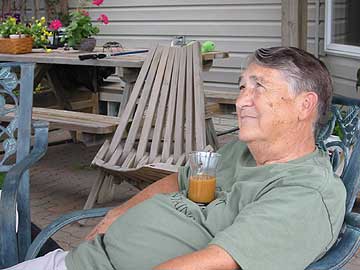 Rose and I operate under certain principles that we constantly keep in the back of our minds. They condition what we do, and how we respond to things. Some of the principles are very serious, and some serve only to underscore the delightful absurdity of life. One example of the latter is something we call “A David Lynch Moment.”

Put simply, a Lynch Moment is any life occurrence that seems to be plucked directly from a David Lynch film. Here’s an example: Last Thanksgiving, Rose and I were driving home from Cornell to visit her parents—it was the beginning of the university’s fall break. We decided, as we often do, to take a non-interstate route once we entered Ohio. It would take us about twice the time to arrive at our destination, but we use any excuse we can to go on a roadtrip. (Interstate driving doesn’t qualify for roadtrippin’.)

On State Route 44, somewhere south of Painesville (aptly named), we came across a car stopped on the side of the road. Since it was Thanksgiving Day there wasn’t much traffic on that route, so we decided to stop and be helpful. We were a little wary—you know, you just don’t approach strange cars these days—but we did it anyway.

As I approached the car, an older woman got out, slowly. At first it seemed like she could barely walk. She was wearing one of those plastic medical identification bracelets they give you during a hospital stay. “Are you alright?” I asked.

She had a flat tire and it turns out she’d just been released from the hospital, having undergone heart surgery. “My son was supposed to come and get me today, but I guess he’s already gone to the house for dinner. So I decided to drive myself home.”

We let her use a cell phone to call her son, who arrived about ten minutes later as I was changing the tire. He looked twenty-five or so. “You guys can go,” he said. “Bein’ from New York and all you’re probably in a hurry.” Well, we were now.

Posted by Jason R. Carroll on Wednesday, July 17, 2002
Tags: observations, trains, weird
Recently I’ve been reading two books on the future written in the early-1980s. Both of them are quite good, and impressively prescient: Megatrends by John Naisbitt and The Third Wave by Alvin Toffler. It’s interesting to note how the early-1980s seemed to necessitate the creation of such forward-looking works. There was an “irrational exuberance” that arguably eclipsed that of the dot-com-bubble economy of the mid- to late-1990s. The eighties were exploding and, man, the future looked hot. Then the U.S. had a recession and then another boom, and now another recession. But boom times call for predictions of the future, and I can’t help but think how much better the two aforementioned books are than the ridiculous New Rules for the New Economy by Kevin Kelly.
Posted by Jason R. Carroll on Tuesday, July 16, 2002
Tags: literature
Nothing to say.
Posted by Jason R. Carroll on Monday, July 15, 2002
Tags: observations
You know, I love coffee. It has to be good coffee. But sometimes, you just need to drink some bad coffee. You know. To remind you how lucky you are to have good coffee. That is what I did this morning.
Posted by Jason R. Carroll on Wednesday, July 10, 2002
Tags: coffee

You find so much good stuff on the road.