This is the type of behavior that's only permissible on one's second birthday: 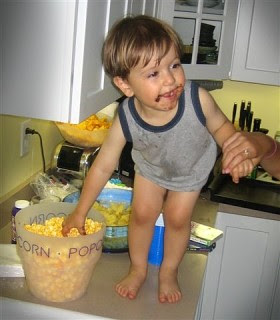 The apple of my eye is two years old!

Posted by Jason R. Carroll on Monday, June 27, 2005
Tags: children, pictures
About a month-and-a-half before Grandpa died, I was flying home from Atlanta on one of those rare sunny early spring afternoons we had this year. Usually when commercial flights land at Hopkins they approach from the north, scribing an arc out over Lake Erie before turning south for the final approach. Sometimes, when the prevailing winds are blowing from a certain direction, the flight will be redirected to land from the south. When this happens, the jet sweeps down southwest as far as New London and Wellington, and then traces the old Conrail line northeast until finally landing. Most people on board complain when this diversion occurs, because it can add as much as twenty minutes to the flight time. Personally I've always enjoyed these detours, because it lets me observe the vast green space in rural southwest Lorain County.

Coming in this particular time, as the pilot was circling around to begin a southern approach for the 2:23 PM landing, I looked down and saw where my Grandparents had lived for the majority of my childhood--a mobile home park adjacent to the mall in Elyria. I saw the elliptical circulation road interconnecting the park; I saw the community center where I had my first and only meaningful interaction with Santa Claus…and then a wave of memory hit me when I looked down and saw the old railroad tracks where Grandpa and I used to walk.

I don't remember exactly how old I was when Grandpa and I frequented those tracks--I think it was a few years surrounding age seven. During summer we would go there many times. In my mind we would spend all day at the tracks. I would do that thing where you put your ear to the rail and listen for trains coming from miles away. I'd hop from one railroad tie to another as grandpa walked patiently alongside me. Together, we'd pick up and throw the tar-soaked pebbles that filled the gaps between ties. Grandpa was in his fifties at the time, and he seemed to enjoy throwing dirty pebbles as much as I did. To this day, the smell of creosote and tar brings me back to that stretch of rail, a sacred place that will always be home to one of the happiest, most carefree times in my life.

That carefree feeling illustrates one of the greatest aspects Grandpa's personality: He new how to go slow, sit back and enjoy life. I learned how to do this by watching him. As Grandpa progressed through life and eventually into retirement, he seemed very comfortable with his transition into the world of observation, rest and enjoyment. He became a true elder--no longer feeling that he had to prove anything to anyone. He took to sitting in a lawn chair in his driveway on warm days--relaxing, observing nature, greeting visitors as they came. He had the wisdom to teach by quiet example.

Grandpa had a way of seeing through affectation to discern real needs or problems. Once, when Rose and I came home for Christmas, we'd had an argument before arriving at the house. I was convinced that we'd composed ourselves well enough that no one would be able to tell. Grandpa pulled us aside and said, "Hey, are you kids having a spat?" His correction was so humble and his demeanor so caring that we couldn't help but make up right there on the spot. He didn't embarrass us...he simply reminded us of ourselves.

When Rose and I were away at graduate school, we rarely had more than a few cents to rub together. Of course we worked very hard to give the impression that we were doing just fine, but Grandpa knew better. On several occasions, as we were getting ready to leave for our drive back to New York, Grandpa would slip something into my pocket. "Coffee money," he would say. Later, when we were in the car and out of sight I'd reach into my pocket and find that this so-called "coffee money" was often a couple of hundred dollars. This is the kind of guy he was.

I could go on about memories of Grandpa...the way he scared me to death driving the winding roads of West Virginia at 65 miles per hour...the way he found endless joy in mowing grass...the way he just loved a new car...the way that he would always pinch Grandma's behind when she least expected it...the way he became the grandfather that my wife never had...I could go on for hours. But I guess I'll just close by saying that I feel fortunate to have been friends with my grandfather for thirty years, that I'm so happy he got to know my wife and son, and that I'm thrilled I'll see him again someday sitting in his lawn chair in Heaven's driveway.